Is AI our enemy? Former world chess champion Garry Kasparov answers that question through Deep Thinking. It's a fascinating record of how chess machine programming has evolved over decades, from a concept by Alan Turing to IBM's Deep Blue supercomputer that finally defeated the grandmaster.

Millenials should take notice. They missed the era when computers were easily out-maneuvered by good players. Kasparov walks us through that history. The problem wasn't simply the feeble computation power (there are billions of possibilities in the first few moves, yet the fastest computers were much slower than today's average smartphone). Engineers thought they could teach computers a kind of intelligence, to make smart decisions beyond the permutations they had time to scan and analyze. Yet the skills remained shallow. Software could play tactically well, for example in end game situations. It was still no match for the imagination and aggression of a top player.

As computer processors became more powerful, the applications could look more moves ahead, and the approach shifted to brute force. The algorithms also got better. For example, the programs could assess a bad position earlier in the search tree, short circuiting it to avoid further computations on that branch.

Kasparov knew that computers would eventually dominate. And he didn't disdain them. Like other players, he'd been using chess programs in his match preparation, to help assess positions. He remained confident, however, that he could continue beating them one on one. And he prevailed for several years in the mid-1990's against the best IBM had to offer. The relationship was good for both sides. IBM got publicity for its technology, which was still centered on hardware. Kasparov got a nice paycheck, a novel challenge, and the chance to share information with IBM's architects.

The pivotal moment came in 1997. Having won 4-2 against IBM's Deep Blue computer a year earlier, Kasparov agreed to a re-match. However, the contest was no longer collegial. IBM wouldn't share any of their preparation, including their practice match results, as they had in previous meetings. And during the match, IBM withheld the print-outs of what moves the program considered. Kasparov lost insight into how the computer analyzed the board. And he lost the match, 3.5 to 2.5.

Kasparov recounts how, under pressure, he made some incredible blunders, worse than any he'd ever made against top competition. He resigned one game without realizing that he could have salvaged a draw. He played his worst game ever in the finale, resigning after 19 moves. While blaming the secrecy of the IBM team -- he found out later they'd hired several grandmasters to improve Deep Blue's "opening book" database -- he accepts that the machine he lost to was radically improved. He might have drawn the match with better play. Still, there was no question that the best chess-playing computer would soon be more formidable than the best human.

What lessons does Kasparov draw for artificial intelligence? He's a strong believer in embracing new technology, without abandoning our own mental faculties. At the same time, machines shouldn't make us lazy. Just as Kasparov criticizes young prodigies who memorize openings but can't explain why they're the best choice, he expects people to learn along-side their silicon assistants.

Fear is the worst reaction, Kasparov argues. If we're afraid of a future where machines have an augmented role, then we're no better than machines ourselves.

Note: This review is based on the unabridged audiobook, not the printed edition. 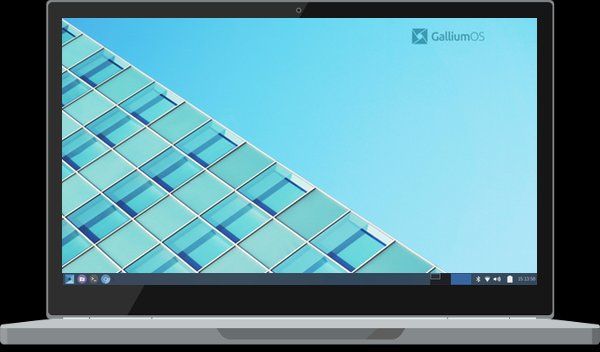 The GalliumOS desktop on a 1366x768 screen Chromebooks come pre-installed with Google's proprietary operating system. It's a perfectly good one, so long as you stick to web browsing. And partly thanks to its limited software, it's very secure. Google manages all that for you automatically. A while back, I experimented